The new federal law could make it easier for student loan borrowers to repay their loans while saving for retirement.

Mark your calendar now so you don’t risk a fine or miss an opportunity to save.

President Joe Biden made a campaign pledge to forgive $10,000 in federal student loans. In August 2022,Â Biden announcedÂ that he would fulfill that pledge and offer $10,000 in student-loan forgiveness to anyone whose income is less thanÂ $125,000. People who received Pell grants while in college are eligible forÂ $20,000 in student-debt relief. Biden’s Department of Education immediately … This will help millions of workers and retirees boost or conserve their retirement savings.

An estimated 200,000 defrauded former college students are set to have $6 billion in federal loan debt wiped clean as part of a proposed settlement agreement filed June 23 in federal court. Borrowers in the proposed settlement attended one of over 150 schools that the U.S. Department of Education has determined engaged in misconduct, including: [â¦] Social Security benefits have been adjusted for inflation since the 1970s. Here’s a look at how benefits have changed in good times and leaner ones.

The adoption of electric vehicles (EVs) in comparison to internal combustion engine (ICE) vehicles has increased exponentially, fueled by government incentives and a friendly regulatory environment. This has resulted in even legacy car stocks going electric in a big way.

This transition from fossil-fueled cars to going electric got a big boost in 2021 when President Joe Biden signed an executive order targeting 50% of all new passenger cars and light trucks sold in the U.S. should be electric by 2030.

But the industry has more recently been hampered by familiar pandemic woes, including supply-chain constraints impacting production and rising inflation being a key concern even as demand continues to be strong for these vehicles.Â

If this was not enough, the Chinese government imposed strict lockdowns across major Chinese cities like Shanghai to contain a wave of COVID-19. This has led to production halts at many key plants for EV manufacturers, which is only compounding a pre-existing automobile chip shortage.

Despite these short-term hurdles, the long-term implications for these car stocks is evident. EV sales hit 6.75 billion units in 2021 â more than double what they did in 2020, according to electric vehicle data site EV-volumes.com. While the impressive growth rate was due in part to easy year-over-year comparisons, expectations are for nearly 41% more EVs to be sold this year compared to last.

But which car stocks are poised to capture this growth? To answer that question, we used the TipRanks database, which allows investors to evaluate stocks using a variety of criteria, including analyst ratings and price targets.

Here, we’ll look at four popular car stocks and see what the pros are saying about each one. Each of the names featured here boasts mostly Buy or better ratings from analysts and each offers significant upside potential to current levels based on their consensus price targets.

After days of speculation about whether America would take this next step, President Joe Biden announced the U.S. would cease imports of Russian crude oil, natural gas and coal.

“The decision today is not without cost here at home,” Biden said. “Putin’s war is already hurting American families at the gas pump. Since Putin began his military build-up at Ukrainian borders â¦ the price of gas at the pump in America went up 75 cents. And with this action, it’s going to go up further.”

U.S. crude oil prices unsurprisingly continued their recent climb, settling up 3.6% to $123.70 per barrel â a closing level not seen since August 2008, but also well off intraday highs above $129.

“The crude supply outlook will struggle to make up for Russian supplies over the next few months, so whatever pricing dips occur could be short-lived,” says Edward Moya, senior market strategist at currency data provider OANDA.

The prospect of sustained high crude prices helped the energy sector (+1.6%) score another win, with the likes of Valero Energy (VLO, +7.8%) and Schlumberger (SLB, +7.1%) leading the pack. A few battered areas of the market, including travel, also rebounded â Booking Holdings (BKNG, +4.5%), United Airlines (UAL, +3.3%) and Carnival (CCL, +2.3%) all finished well in the green.

The major indexes were all over the place throughout the day, swinging from modest losses early to robust gains, then pulling back into the red by the closing bell. The Dow Jones Industrial Average was off 0.6% to 32,632, the S&P 500 declined 0.7% to 4,170 and the Nasdaq Composite slipped 0.3% further into bear-market territory to 12,795.

One of the best pieces of advice for fading the market’s current volatility hearkens to a basic tenet of the buy-and-hold crowd: Sit back and collect dividends.

“If you are looking for less volatility these days, shares of dividend paying companies can often offer some stability when the volatility index (VIX) spikes,” says Lindsey Bell, chief markets and money strategist for Ally Invest. “Perhaps now more than ever, prioritizing profitability and steady operations might be a safe move for your portfolio. As inflation fears persist, owning shares in firms that generate strong cash flows today could help buffer your risk of higher consumer prices over the next year.”

Any list of sturdy dividend stocks is going to begin with the Dividend Aristocrats â 66 companies that have raised their payouts annually, without interruption, for at least 25 years (but often much longer). But investors can go after dividends in myriad other ways.

Oil and gas master limited partnerships (MLPs), for instance, can help you enjoy energy-market gains while netting yields in the 8%-9% range.

Or, you can specifically target dividend stocks of different stripes that have gone on sale this year. These seven income plays are hanging from the bargain rack right now, and each of them provides a better yield (by varying amounts) than the S&P 500 average.

News of Russia’s full-scale invasion of Ukraine sent stocks plummeting out of the gate today.

“We’re clearly in risk-off mode in the market right now given the uncertainty regarding the military operations in Ukraine,” says Brian Price, head of investment management for Commonwealth Financial Network.

“There seems to be some element of surprise that the events have escalated so quickly and I would expect that we’ll continue to see volatility in the near term.”

Indeed, after the Dow Jones Industrial Average flirted with correction territory and the Nasdaq Composite slipped below its bear-market level on an intraday basis, the major market indexes reversed course as President Joe Biden announced a new round of sanctions against Russia, including freezing trillions of dollars in Russian assets, and said he is sending additional U.S. troops to Eastern European countries that are in NATO. 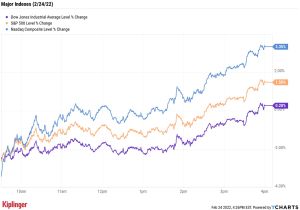 One Way to Hedge Geopolitical Risk

One way to hedge international turmoil: commodities. This is according to a team of Goldman Sachs Commodities Research strategists.

“With news of Russia’s invasion of Ukraine emerging, commodity markets have rallied aggressively, acting as the clear geopolitical hedge of first resort,” they write.

This was seen in the price action for several commodities today, most notably U.S. crude oil futures, which topped the $100 per-barrel mark in intraday trading â their first move above this level since 2014 â before settling up 0.8% at $92.81 per barrel.

And prices are likely going to head even higher, with many experts predicting oil could hit the $125 per-barrel mark. “Uncertainty around potential sanctions is beginning to create a potential supply shock,” the team says. “In our view, until the uncertainty around the rapidly escalating situation is resolved, commodity price risk remains skewed to the upside.”

Not only would a continued rise in oil prices spell good news for traditional energy stocks and energy exchange-traded funds, but also master limited partnerships (MLPs). These firms, which are largely responsible for pipeline infrastructure and storage facilities, offer both exposure to the booming energy market and high dividend yields to boot.

Ukraine-Russia tensions wrested control of investor sentiment from the Fed in a difficult session for the broader markets, which was exacerbated by a few pieces of disappointing economic news.

On Thursday, both U.S. President Joe Biden and British Prime Minister Boris Johnson warned that the shelling of a kindergarten in Ukraine’s eastern Donbas region might be a “false-flag operation” meant to give Russia an excuse to invade the country.

“The evidence on the ground is that Russia is moving toward an imminent invasion,” Linda Thomas-Greenfield, U.S. Ambassador to the United Nations, told reporters. “This is a crucial moment.”

Also sending stocks in the wrong direction were a few weak reports, led by initial unemployment claims that came in at 248,000 for the week ended Feb. 12 â well ahead of expectations for 219,000 filings and up from last week’s upwardly revised 225,000.

Also Thursday, January housing starts came in shy of estimates, as did a February reading of Philadelphia-area manufacturing activity.

“Some of January’s dip in housing starts reflects especially tough winter weather. The January industrial production report released yesterday showed utilities output jumped nearly 10% from December, even after accounting for normal seasonal swings. The severe winter weather that hit much of the country in January held back housing starts,” says Bill Adams, chief economist for Comerica Bank. “But supply chain problems also continue to restrain housing activity; one illustration of the ongoing dysfunction in supply chains is the 25% monthly increase of softwood lumber prices in the January producer price index.

Investors skittered away from cyclical and growth sectors alike, with technology (-3.0%) and financials (-2.5%) leading the way down.

There was appetite for defense plays, however, with consumer staples (+0.8%) the day’s best-performing sector.

“The S&P 500 has found some footing in recent days but the options market remains skittish,” says Michael Oyster, chief investment officer for asset-management firm Options Solutions. “The CBOE Volatility (VIX), often referred to as the market’s ‘fear gauge’ is in the top 15% of its history signaling concern among sophisticated investors. Both weekly and monthly options expire this Friday, which could further spike volatility.” 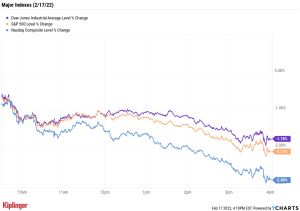 Find Opportunity in the Market Upheaval

The market is teeming with too many risks for volatility to just magically disappear. So for now, your best options are to defend against it â or use the dips as an opportunity to invest in longer-term trends on the cheap.

Among those trends on the skids is green energy, which despite generally growing long-term growth estimates has suffered of late; several popular green energy funds are off 40%-50% over the past year.

If you’re looking for somewhere to begin, consider this short list of 10 green energy stocks that might be down now â but are nonetheless poised to profit from an expected boom in expanded energy capacity for years to come.