PacWest Bancorp is restructuring its operations as it looks to exit silos and unify its business lines. That includes making changes at its Civic Financial Services mortgage lending business. “PacWest has a long history of acquisitions that brought us great customers and talented employees, but also very processes and different cultures,” said Paul Taylor, who … END_OF_DOCUMENT_TOKEN_TO_BE_REPLACED

For already struggling small lenders, Fannie and Freddie loan repurchase requests are another slice in what one market observer calls âdeath by a thousand cuts.â

An earlier version of this story included a statement from Better. A source familiar with the company said the firm couldn’t legally comment on the story due to securities law while a public offering is in the works, and the company declined to comment further. January 21, 2023 10:00 AM EST An earlier version of … END_OF_DOCUMENT_TOKEN_TO_BE_REPLACED

A friend out in California asked me how much, on average, I spend on a bottle of wine. I replied, âAbout half an hour.â Plenty of wine is being consumed while watching Yellowstone and 1923, and while all the women are ogling Spencer Dutton in 1923, in some non-mortgage news to save the economy the Secretary of Homeland Security will announce next month that the Immigration and Customs Enforcement will start deporting seniors (instead of illegals) to lower Social Security and Medicare costs. A major study concluded that older people are easier to catch, offer less resistance, and, more importantly, will not remember how to get back home. In actual news, lenders who own servicing continue to peel it off because it either doesnât fit their portfolio, or they need the cash. The owners of lenders continue to examine various business strategies as we start 2023, with some thinking that it doesnât make sense to remain the size they are. There was a lot of mergers and acquisition activity last year, big and small. I am told by my M&A friends at STRATMOR (Garth & David) that 2023 is lining up for even more. (Both will be in San Diego at the IMB Conference if you want to confidentially meet up.) This weekâs podcast is sponsored by Candor. Candorâs patented automated underwriting decision engine, CogniTechâ ¢, is a state-of-the-art, 100% machine platform that can handle infinite loan scenarios. Todayâs has Part Two of an interview with Tom Booker and Tom Showalter on how every underwrite is an anomaly.

American Pacific jumped on the opportunity to recruit AmeriFirst employees after learning the lender’s branches were ceasing originations.

The post What Is Alpha Unlocking the Secrets of Smart Investing! appeared first on Money Under 30.

Andrew Hauck learned everything he knows about real estate from his mom. As the broker/co-owner of CENTURY 21 Signature Realty in Saginaw, Michigan, Andrew started…

The post M&A â ITâS ALL ABOUT THE AGENTS first appeared on Century 21Â®.

U.S. equities followed up last week’s losses with a comeback in this week’s opening session, but the day’s biggest news was a deal cementing an M&A Monday for the ages.

Numerous global bourses finished lower earlier Monday amid worries about a COVID-19 breakout in China and fear that restrictions would weigh on global growth.

“Beijing is on ‘high COVID alert,” with three days of testing to begin in a central district of Beijing after 15 new cases came to light, which will impact 3 million people,” says Jennifer Lee, senior economist for BMO Capital Markets. “Lockdowns are not planned, apparently, but let’s see how these tests go and if there are any new cases.”

Monday’s most significant headline, however, was the juice behind the communication sector’s move: a jump in Twitter (TWTR, +5.7%), which has agreed to Tesla (TSLA, -0.7%) CEO Elon Musk’s buyout offer of $54.20 per share â a deal worth $44 billion.

Prior to Monday, TWTR shares hadn’t traded close to the offer price amid questions about how serious the offer was and how Musk would pay for the transaction. But recent reports that he had financing, as well as Monday reports that Twitter’s board had warmed to â and, later in the day, accepted â Musk’s overtures to take the social platform private sent shares up to a close of $51.70. (You can check out our report for more about Musk’s deal for Twitter.)

While most social media companies didn’t move much on what would be the world’s biggest leveraged buyout ever, Digital World Acquisition Corp. (DWAC) â the company behind Donald Trump-backed Truth Social â plunged 12.9%. 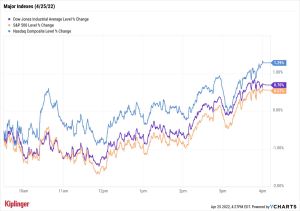 Is a Recession Coming? (And If So, Should You Do Anything?)

While the rest of us gawk at a major social platform falling under the control of the world’s richest man, market strategists remain fixated on the economy. Linda Kitchens, director in wealth management at Aspiriant, is among those who sees a greater chance of the U.S. economy falling into recession.

“We think recession probabilities for the next 18-24 months are in the 25%-30% range, which is meaningfully higher than where we were at the end of 2021 (probably less than 10% chance of recession then),” she says. “Economically, things like slowing growth, increasingly higher inflation and elevated commodity prices are important things to watch.”

But she warns about making any major moves in anticipation.

“While the likelihood of recession has certainly increased, it’s important to remind investors to stay focused on having a long-term time horizon, remaining fully invested and avoiding any market timing. As has often been said, ‘far more money has been lost by investors trying to anticipate a recession than lost in recessions themselves.'”

To that end, the best thing you can do is position yourself in investments built for the long haul. For some, that means large, blue-chip companies that have been deemed worthy enough for inclusion in the Dow Jones Industrial Average (and we rank all 30 of these mega-cap names here). For others, that means companies that have proven they can not only profit â but share those profits â for decades on end (like the Dividend Aristocrats).

And for still others, one of the best ways to keep calm and steady, regardless of what the economy throws our way, is to hand over the keys. Investors can do quite well by allowing seasoned fund managers who charge reasonable fees to manage the stocks and bonds they want to hold. That’s the idea behind the Kip 25: our 25 favorite low-cost mutual funds.

In March, the Federal Reserve raised benchmark interest rates for the first time since 2018. And in the intervening weeks, Fed Chair Jerome Powell has been increasingly clear that even higher rates may be on the way soon. That has investors scrambling to scrape up the best stocks for rising interest rates.

Speaking on March 21, Powell said the central bank will move “expeditiously” and “more aggressively” towards higher interest rates. That has left little doubt in the minds of many investors about what’s in store for the markets in the coming months.

To be clear, rates are still relatively low even after all this. The effective federal funds rate now sits at 0.33% instead of 0.08% prior, but that’s not even within earshot of rates from prior decades that were several full percentage points higher.

Furthermore, rising rates should never be seen as a death knell for the economy. In fact, the presence of rate increases is because the Federal Reserve sees inflation as a bigger risk to the U.S. economy than the burden of higher borrowing costs. If businesses and consumers weren’t churning along, there would be concerns of how these rate hikes would be absorbed, keeping Powell and other policymakers in check.

There are certainly changes that are afoot as a result of higher interest rates, but investors should not make the mistake of thinking these moves means you should abandon the stock market entirely. Indeed, several of the best stocks for 2022 had the potential for rising rates on the mind, and today, we’ll be looking at a few that are tailor-made for this environment.

Data is as of April 3. Dividend yields represent the trailing 12-month yield, which is a standard measure for equity funds.

Turmoil in the stock market has many investors looking for ways to manage risk. If your goal is safety and reliable income, a great starting point is the Dividend Aristocrats, a group of high-quality S&P 500 stocks known for delivering at least 25 straight years of dividend growth.Â

A dependable dividend can also have a significantly positive impact on stock performance since these payouts typically account for roughly one-third of total annual return, according to S&P Dow Jones Indices.

Equally as important, the increasing payouts from the Dividend Aristocrats have not come at the expense of an attractive yield. These stocks have consistently delivered, with yields averaging 2.5% over the past 24 years versus a 1.8% yield for the S&P 500.Â

The potent combination of consistency and rising dividends have helped the Dividend Aristocrats outperform the broader S&P 500 benchmarks over long periods with lower volatility.

One measure that captures the downside protection provided by these stocks is beta, which calculates an individual stock’s volatility versus the overall market. Since 1990, the average beta for the Dividend Aristocrats has ranged around 0.8. Any beta below 1.0 indicates a stock that is less volatile than the S&P 500.

Here, we look at five Dividend Aristocrats with betas below 1.0. Each of the safe dividend stocks featured here offer investors solid downside protection and provide an exceptional dose of stability with reliably rising income.

Data is as of March 15. Dividend yields are calculated by annualizing the most recent payout and dividing by the share price.