This is a guest post from Steve Adcock, who writes at Think Save Retire, a blog about early retirement and Financial Independence. Steve and his wife retired in their mid-thirties to travel full time in an Airstream trailer. For more info, check out their YouTube channel.

One of the most deeply-embedded pieces of the âAmerican Dreamâ is the desire for a large, spacious home with lots of sitting rooms, corners, nooks, and crannies. Large dining rooms and other entertainment spaces! Wrap-around porches! Two- or three-stall garages and one heck of a master suite!

To many of us, a large home is a mark of success. A big house indicate status, and the more space weâre able to call our own, the more successful we look and feel.

But, what if I told you that most of us donât use even a fraction of that space? Thatâs not just me talking. A research team affiliated with the University of California studied American families and where they hung out the most inside their homes, how (and where) clutter builds, and the general stress level associated with living big.

The findings were overwhelming: The majority of the space in our homes is wasted.

How We Use Our Homes

As J.D. shared on Saturday, researchers at UCLA conducted a detailed study of 32 dual-income families living in the Los Angeles area, one of the first studies to document so vividly how we interact with the things for which weâve paid good money. The findings were not pretty. In fact, they helped prove how little we use our big homes for things other than clutter or objects that hold little intrinsic value.

From the press release:

The researchers doggedly videotaped the activities of family members, tracked their every move with position-locating devices and documented their homes, yards and activities with reams and reams of photographs. They asked family members to narrate videotaped tours of their homes and took measurements at regular intervals of stress hormones via saliva samples.

When I originally wrote about the study, I took special note of where families spent the large majority of their time. In the following UCLA-published diagram of one family that was studied, we can easily observe a truth thatâs probably common among so many of us: We tend to congregate around two primary areas of the home: food preparation/eating and television. 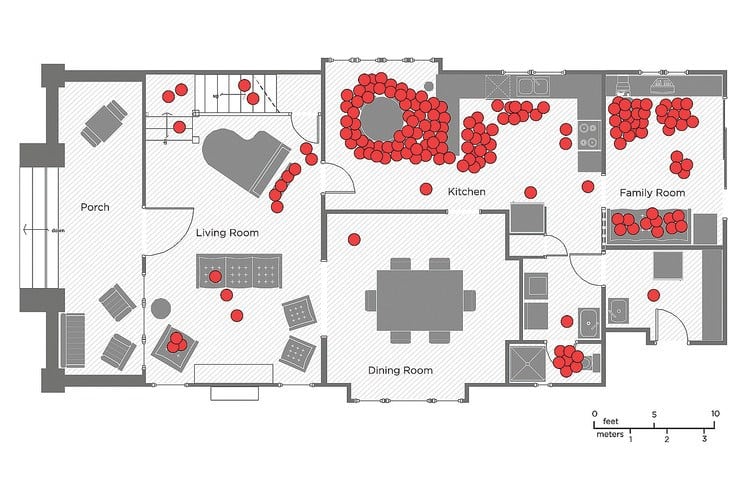 While this diagram only represents a single family, the results of the study suggest that this family is very typical of most of those studied, and the majority of traditional homes.

Hi, I’m Ariel, Michelle’s sister-in-law and editor. I’ve been editing and learning from Michelle’s blog for over two years now, and if you’ve read any of the posts I’ve written for Michelle, you know I’m conscious about my savings and spending. I have a degree in English Literature, and I make a living as an […]

The post Smaller Can Be Better- Maximize Your Savings With A Small House appeared first on Making Sense Of Cents.

Let’s get this out of the way first – saving your money is one of the best things you can do for yourself. And, the financial security that comes from learning to save your money means you’re able to pursue your passions, try new things, and jump on whatever adventure comes your way. So, why […]

The post Want To Live Your Best Life? It Starts With Saving appeared first on Making Sense Of Cents.

Online shopping has opened up a new world of convenience for busy multitaskers and shopaholics alike. The U.S. Census Bureau reported a 3.9% increase in e-Commerce sales in the second quarter of 2018, bringing online sales to $127.3 billion. With services offering to deliver your groceries, toiletries, and revamp your closet – itâs hard to

The post What is a Virtual Credit Card? appeared first on MintLife Blog.

The index tracks how much consumers are spending on goods and services. It’s frequently used to measure inflation.

The 401(k) plan is the largest asset many investors own accounting for 36.2% of their total net worth according to the U.S. Census Bureau. Regularly checking your 401(k) account can help you stay on top of your investments, and make sure that your money is working for you in the best way possible. What is […]

The post How to Check Your 401(k) appeared first on Good Financial CentsÂ®.

Like many U.S. housing markets, Rochester, New York, has been facing a gradual decline in home sales due to a general shortage in the number of properties available. Research from the Greater Rochester Association of Realtors indicates that closed sales volume decreased by 2.9 percent in 2018 following a 1.4 percent decline in 2017. While […]

How are homebuilders positioned heading into spring? It’s all about mortgage rates as they move through a backlog of unfinished homes.

Mortgage rates are falling and builders are offering incentives to buyers, but that wasnât enough to prop up new home sales in 2022.Â